This is my Working Holiday Experience as a New Zealander and Australian. filled with English teaching, working, and living in Japan as a kiwi! Hopefully by reading through this you can enjoy my story but also make your own decision when coming to Japan!

My working holiday experience in Japan so far has been filled with nothing but delightful and unforgettable memories coupled with a few minor difficulties and challenges along the way. I first decided to move to the Land Of The Rising Sun (Japan) about 2 years ago. Around that time was when I heard Japan would be hosting The 2019 Rugby World Cup and The 2020 Summer Olympics. Personally, my favourite two major sports events and arguably, two of the world’s major sporting events! I thought to myself, what better time to visit the land of the weird, strange, and unique so I, too, could immerse myself in the culture.

Before you even start your working holiday experience you need to get a visa. Applying and acquiring a working holiday visa was fairly simple, from what I’ve heard from multiple people, it doesn’t vary too much and is quite standard. Depending on what passport you have you could be applicable too! I found all the info I needed on the immigration website. I believe if you have a passport from New Zealand, Australia, UK, Ireland, Canada, Germany, and many other European countries, Argentina, Chile, Korea, Taiwan, or Hong Kong you can get one!

Once I received my visa, my year away from everything I’ve ever known, languages I spoke and friends I’ve made,  began.

I moved to Japan in late September 2019 just in time for the start of The Rugby World Cup. I chose to fly into Haneda Airport in Tokyo. There’s two there but from my research, Haneda is accessible by many trains in Tokyo while the other one is slightly further out. I would recommend flying into Haneda airport as it is much closer and relatively cheaper to the main areas of Tokyo.

Luckily, because of the timing of my trip (Rugby World Cup), there were many signs that were in English and a lot of helpful English speaking helpers that picked up part-time jobs, stewarding. I can’t emphasise how much that was helpful for me, I was new to the culture and everything!

Thus making my move a lot easier, language-wise and travel-wise.

My favourite experience during the RWC was when I went to Kyushu to watch two games. 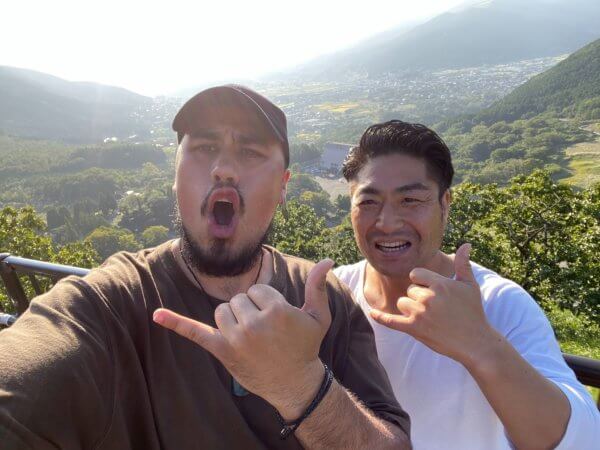 I had originally planned to stay in a hotel but that all changed when I met a very nice Japanese man named Nobu san. I’ve heard about Japanese hospitality and friendliness but I never imagined this situation. I met Nobu-san, Who was on the same flight as me from Tokyo to Kyushu. As we got to talking I found out that he was from Oita, a host city of the RWC. Nobu-san was kind enough to invite me to a Japanese wine, sake, (More events here) event where I would be fortunate enough to meet some more people!

I met a lovely Japanese family who asked if I would be interested in doing a homestay experience. Having never done one before, I jumped at the opportunity, so I canceled my hotel and what was originally meant to be a 3-day trip turned into a 9-day trip courtesy of the very generous and good-natured Japanese family!

Back to the city, back to reality

Fast forward two months and it is now December and after 3 months of traveling around Japan, experiencing its vast culture and indulging in many delicious foods I decided to start Job hunting. What better way than to try part-time teaching in Tokyo? I thought. ( I really started missing ______. If you’re from New Zealand or Australia, don’t forget to bring enough to last you a while!)

At first, it was a scary thought. I mean, I’m in Japan… I don’t speak much of the language. What about the work culture? We’ve all read that the Japanese are hard-working and all have heard the rumors about jobs or what people say are “black” companies. I didn’t want to end up in a position where I just ruin the experience and all the good memories that I’ve made so far!

Thankfully I had some help from the place I was staying at called World Unite. They helped me get set up with everything, from what to add to my resume to getting a Japanese phone number. Those of you who have lived here in Japan, or are doing your research, might have heard about the “deadly triangle” as I like to call it.

I began my search for teaching jobs in Tokyo, I came across a few listings but none of them ever jumped at me. I browsed glassdoor and Craigslist. Those seemed to be the simplest method, there were also other places to browse which BFFTokyo has listed here. I clicked through a few posts that eventually led me to One Coin English. Initially, I wasn’t sure about it but browsing the website and trying to cross-reference reviews made the decision much easier. I decided. I wanted to be a part time teacher here. Teaching English in Tokyo, in fact… Teaching English wasn’t something I’d ever done before.

With no experience, armed with just a CV (and a smile) I applied for the teaching position here.

"No experience, no problem"

They wrote “no experience, no problem” on the Website but I was still a bit nervous. Prior to this, I had mainly been working in construction. After sending in an application, I received a reply fairly quickly.

A few days later I cleared the first hurdle. I had passed the video interview! The video interview was great for me, it helped me understand the position better but also feel confident in my chances. The next step was an in-person interview with a demo lesson. Again, I had never taught before so hearing there was going to be a demo lesson made me really really nervous.

The shining grace was that OCE provided me with a guide and the actual demo lesson material.

Having this material made it really smooth for me, I was able to understand what was needed and how to make it successful. When I went into the Shinjuku branch, I saw many other teachers from different nationalities. I was really happy to see that they weren’t exaggerating about the international environment. After waiting for about a week I had received tremendous news, I had been offered a position at OCE and to my delight, I accepted and was eager to start working.

I think with the whole COVID-19, Coronavirus thing, the experience of being an English teacher in Tokyo will vary quite a lot. Here’s just my experience from the start of 2020, to battling through coronavirus, all the way to where I am at now.

My very first day as a part time teacher, I would have to say was very good. My multi-national co-workers were very welcoming and were always offering me tips and words of wisdom. Especially when I slightly freaked out when I found out my lesson was a pair of siblings instead of just one student!

I can't understand you!

As a national from down under, the initial big challenge I faced when socializing with my co-workers and with teaching English, was in fact, my English. You’re probably like what? But you’re native… What do you mean? As I had only had the chance to live in New Zealand for 13 years and Australia for the same amount of time, I had developed a rather unique accent. Some would even say a strange way of speaking English.

Australians and New Zealanders have different ways of expressing themselves using various terminology and slang. The main bulk of Japanese who learn English will lean towards American English. Mainly due to the sheer amount of American citizens in Japan. They might have also learned American English in their younger years. Many were puzzled as to what I was saying or meant when I communicated with them! Even to this day I still surprise some of my co-workers with my English. As time went on I slowly but quickly improved my way of speaking and overcame this small obstacle. At least I thought…

Lockdown! The virus is here!

When Coronavirus started making waves across the globe, Japan was still one of those places with a few limited reported cases. The school closed around April to move to Online only based teaching. This was great, except… What I realised was I relied a lot on my body language to communicate when students didn’t understand. This is a very big challenge for me, I can say that I still haven’t 100% mastered this whereas some of my colleagues were very fast to adapt!

Luckily, we moved back to a mixture of Online and in-person which allowed me to keep teaching my favourite students.

Almost the finale, or is it?!

With my visa nearly coming to an end, I’m weighing my options between staying in Japan through learning the language at school or going home to be with my family for a while. Whatever I decide on choosing, I can confidently say I’ve made great friends, worked with great people, and have learned so much. If it weren’t for the looming presence of you know what, I would definitely be traveling to other countries!

Want a Sharehouse in Tokyo? Check out our top picks (Discounts!)

The Ultimate Guide to Part-Time Jobs in Tokyo

One Coin English Blog: 10 Benefits of Teaching English with Us

5 Tips on Teaching English to Adults in Japan